Eulogy For A Dog 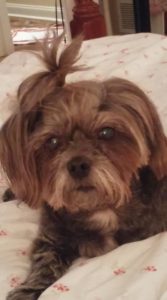 Our little pet, Emma, died yesterday. It was a hard day. Emma came to us when she was seven years old. If the ratio of dog years to humans really is seven to one, that would have made her 49 when we adopted her and 77 when she died. We received her when two friends were moving out of the country and decided it wasn’t practical to try to take her with them so they entrusted her to our care.
We were told that Emma had been more than a companion to her previous people-parents. The wife, a close friend, had dealt with a bout of depression and she described to us how Emma would lie close beside her, bringing her comfort for as she moved through her emotional ups and downs. Her words were, “Emma has helped me so much.”

“Helped me.” Those are words usually reserved for seeing eye dogs or breeds trained to be service dogs of some sort. You wouldn’t expect to hear that about a small dog who was a mix of Shiatsu and Yorkie and who hadn’t been trained to do anything in particular.  But she didn’t need training. It was just Emma’s nature.
We learned that fact when she came to our home. During the time period when we adopted Emma, Melanie was having a particularly difficult time with her health. She had just been diagnosed with Rheumatoid Arthritis and, completely unrelated to the R.A., doctors had told her she had a degenerating spine. They weren’t easy days and she spent many of them in bed and in pain. Right away, Emma seemed to sense there was an issue and immediately was drawn to Melanie. She would lie on the bed for hours beside Melanie, stare into her face, wag her tail and lick her hand. It seemed that on days when Melanie felt worse than others, Emma sensed it it and stuck closer and acted even more attentive.

A recent article on webmd.com reported that, “For nearly 25 years, research has shown that living with pets provides certain health benefits. Pets help lower blood pressure and lessen anxiety. They boost our immunity. Playing with a dog can elevate levels of serotonin and dopamine — nerve transmitters that are known to have pleasurable and calming properties.”

I can vouch for that with our little Emma. Emma was Melanie’s dog. She was affectionate to me but there was no denying that Melanie was her human mommy. She babied that dog like Emma was a child. She bought sweaters and toys and all kinds of things that I teased were ridiculous. At times Melanie would turn the TV on when we left the house so that Emma would hear human voices while we were gone. She even had a Christmas stocking one year. Yes, my wife had a relationship to Emma that I did not know or even always understand.

Having said that, I remember a specific incident when Emma turned her attention toward me in the way I’d seen her do with Melanie many times.  It was a particular situation when one of my children was dealing with an upsetting problem. My emotions were on a ten and I was venting to Melanie, expressing my thoughts in an animated way. As I was speaking, Emma walked straight over to me and began to nudge my arm with her nose. When I looked down at her, she began to lick my arm then look up into my face. Then she’d lick my arm and look up again.
“Look at her!” I said to Melanie. Immediately my emotions subsided and I looked back down at Emma, reached out and petted her and said, “It’s okay, girl. I’m alright.”

“She is comforting me!” I said to Melanie. And she was. I could feel my emotions stabilize as she kissed me.  It was something she did, not once, but many times over the past years.

Hebrews 1:14 says that angels “are spirits on a divine mission, sent to serve those who are about to inherit salvation.” I know it’s talking about angels of a different sort and don’t want to push the envelope to the point of silliness, but the word “angel” does mean “messenger” if we’re literal about it.  So, in that sense, Emma was a little angel. She brought the message that we are loved to both the family who had her before us and then to us. In her own way, she showed us that depression and pain and frustration matters.  She stood with us in our dark hours, silently but actively showing love to us. Her affection was nothing less than a balm – medicinal –  at times. She was an agent of healing, emotionally and even physically at times. Wow, at the risk of sounding irreverent, that little canine girl sounds like Somebody Else I know. In fact, it doesn’t violate my faith or impugn His character to think that His hand reached out to us through Emma at times as she calmed our angst and brought a smile to our faces during some dark moments in life.

The Bible says that when a bird in a tree falls to the ground and dies, our Father knows. The One who created everything cares about everything. So that leads me to the unavoidable conclusion that when Emma drew her last breath yesterday, He was involved.  As she physically spiraled downward during the final hours at home, we knew she needed to go back to the veterinarian for the second day in a row.
I flew to Houston and Melanie took her back to the vet. Within a short time, a compassionate, teary-eyed young woman who had examined Emma thoroughly told Melanie that Emma would not survive this episode. She was struggling to breathe and the vet said that the most merciful and loving thing toward her would be to put her down.  Melanie asked if she could spend a few moments with her first and, of course, the compassionate dog-doctor agreed.

For ten minutes, Melanie sat alone with Emma, cupping her hands around her head and gently stroking her with final gestures of love. When the vet came in to give Emma the shot, Melanie leaned across her and kissed her forehead, telling her that she loved her as Emma breathed her final breath. Then it was over . . .

Or was it?  Do dogs live in the afterlife? The Bible is silent on that subject. The Scripture speaks of lions and lambs lying in peace together at a future date. It speaks of Jesus returning on a horse. These and a few other scarce references could only be metaphorical. Or, in a subtle way, they could tell us something about the next world.

I know how I enjoy it when I surprise the people I love with gifts they didn’t expect to receive. I also know that quality in me is a God-like quality. So it won’t surprise me if there shall come a time when Melanie steps across the thin veil between time and eternity and sometime shortly afterward sees a little gray bundle running toward her, tail wagging and tongue poised to kiss. It may sound odd to say that if this were to happen, it would enhance heaven itself for Melanie but I tell you with certainty that I know it would.

Emma will be missed. Melanie cried as I spoke to her on the phone last night but, like all grief in life, the tears will subside. The sadness will gradually give way to a nostalgic love that leaves a warm spot in the heart when Emma is remembered and her name is mentioned.  Emma was a dog but she was more than a dog. She was a minister. She loved unconditionally. She comforted. She offered friendship. She gave and received love well. Go in peace, dear Emma. The verdict on your life is greater than I’ve been able to speak over the corpse of some human beings I’ve known. The verdict is this: Yours was a life well lived. Go, now. We release you but we won’t forget you and we will forever be grateful for the gift of the days we shared with you.